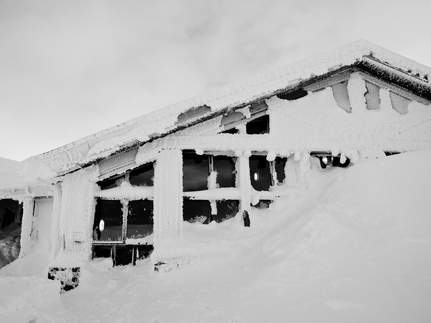 Of everything, I remember the last time I visited you at the toy store. It was a Friday, early February, the day it really started to snow in earnest; and since I wasn’t working Fridays then, I came downtown to keep you company. The city had already fled: traffic out of town at a standstill, high beams on, wipers going; Main Street as empty as a stage. The afternoon sprawled before us. One o’clock, two o’clock, three o’clock: customer-less hour after customer-less hour crept by, so we drifted through aisles of bouncy balls and jigsaw puzzles and deluxe backgammon sets, board games with names like Gassy Gus and Gooey Louie. ​You actually sell this shit? I said incredulously, game in hand, and you laughed and said, ​what’s more, people actually buy it.

Meanwhile, the snow outside came down in curtains. It stacked on top of cars, buried curbs, drifted against the door, and it wasn’t until I stepped outside to feed the meter that I realized that every other store in sight had closed down and slipped away to the warmth of furnaces and fireplaces. I went back inside and said, ​look at this​, and we stepped out as an ambulance slid by at ten miles an hour, lights flashing a silent symphony of reds and blues against the white canvas of the city. It rounded a corner and vanished; the snow twisted in the wind like someone shaking out a sheet and covered the tracks with ease. And because it felt like nothing was quite real that day, you locked the store and we wandered off into the padded afternoon. Street after street: bars, thrift stores, movie theaters, all boarded up, desolate. There was a kind of freedom in it. Snow nestled in your hair; silence nestled in every alley. There in the empty streets, I felt closer to you than I had in a long time.

Maybe you remember it differently. Maybe you remember only the cold, how the city had seemed -- for weeks -- to be electrified: doorknobs, handrails, water fountains, all treacherous. Maybe the tips of your ears had already begun to sting, or your coat had a hole or had been forgotten behind in the store. Maybe the whole time you were searching for another face, a set of footprints in the snow, a cough or a car horn, because there was something eerie about the lack of sound: a city on mute, where even the ambulances didn’t turn on their sirens.

Maybe there was a weight. Maybe, when you recall that aimless afternoon spent among piles of action figures and stuffed animals, you remember not ducking behind towering displays of yo-yos and shooting toy arrows at each other, but the spaces in our conversation: the cramped, uneasy silence between us. ​I’m worried we’re going stale​, you said to me not long after. ​Past our expiration date. Maybe we’ve come as far as we can. We’re not the people we used to be. But I barely heard you, because I kept trying to picture us as bread gone hard, or milk gone sour, and instead I just saw seeds struggling up through frost-bitten earth. Look back, I wanted to say. We remember beginnings, not endings. We remember the quiet beauty of the first kiss, not the banality of the last. We forget the dead air, the long drives with nothing to talk about, the arguments about the future, and we hold on to trinkets of memory: blues dancing at one in the morning, our bodies in slow motion; washing you in the shower, water in streams down your back, my fingers drawing lines from freckle to freckle; wandering the empty, muffled streets of our city, snow whipping around, you burrowed into my arm for warmth. Look back.

But maybe you don’t remember that day at all. Maybe all you remember is a day when it started to snow and didn’t stop for a week. Maybe everything else about that day has gone, melted away, and all that remains when you close your eyes is a world swallowed in snow, lost beneath a billowing, unending blanket of white.
Will Preston was born in Virginia and has since lived in Oregon, England, and the Netherlands. He has written extensively on film, travel, music, and history, and is currently pursuing an MFA in Creative Writing at the University of British Columbia. This is his first publication.

A 2016 Pushcart Prize nominee, Will's essay can be found in Issue 12 of Glassworks.